ASP.NET MVC famously has great support for unit testing. That’s well covered elsewhere on the web, so I won’t write more about it here. But what about integration testing?

Typically, ASP.NET MVC developers have written integration tests using a browser automation tool, such as Selenium or Microsoft’s Lightweight Test Automation Framework. These tools host a real web browser and automate a series of navigation steps, clicking on buttons and letting you write assertions about what should appear on the screen. Browser automation is fully capable of testing your JavaScript code just as easily as your business logic. However, there are also some drawbacks to browser automation:

So, how can we do integration testing without browser automation?

What if you could write NUnit tests (or xUnit or whatever you prefer) that directly submit a URL, query string, cookies, request headers, etc., into your application – without needing the app to be hosted in any web server but still running in the real (non-mocked) ASP.NET runtime – and get back the response text to make assertions about? In fact, what if you also got back the ActionResult (e.g., a ViewResult) that was executed, a reference to any unhandled exception it threw, and could also write assertions about cookie values or the contents of Session? What if you could string together a series of test requests to simulate a user’s browsing session, checking that a whole feature area works from end to end?

Well, my friend, all this can be yours with MvcIntegrationTestFramework

Download the demo project. To run the integration tests, you’ll need to install *NUnit or some other test runner.*

You can write an integration for this using MvcIntegrationTestFramework as follows:

This is pretty similar to a typical unit test for that action method, except that you also get access to the finished rendered HTML, in case that interests you. Unlike a unit test, this integration test goes through the entire request-processing pipeline, so it tests your routing configuration, your controller factory, any dependencies your controller has, and even your view template.

Note: That doesn’t make it *better *than a unit test: it just solves a different problem. Unit tests are better for driving the TDD process and for proving the correctness of individual components in isolation, and they tend to be easier to maintain large volumes of over time. Integration tests, on the other hand, are good in small doses: they cover things that unit tests cannot (such as views, database connectivity, etc.) but aren’t so fine-grained as unit tests.

Consider the following sequence of behaviours:

That’s a lot of interaction between action methods, Forms Authentication, HTTP redirections, cookies, and filters. You wouldn’t typically cover that interaction in any unit test, because each of those components is a separate unit. However, if you have an end-to-end unit test that runs through the whole process, you can feel very confident that you haven’t unintentionally broken anything (e.g., by editing web.config).

Here’s a example end-to-end integration test for this whole sequence of behaviours:

In this test, multiple requests are made as part of the same browsing session. The integration testing framework will preserve cookies (and therefore session state) from one request to the next, so you can test interaction with things like Forms Authentication and ASP.NET MVC’s AntiForgeryToken helpers. You can see this whole thing working by downloading the demo project.

This has advantages over browser automation in that (in my opinion) it’s easier to write this test – it’s concise, you don’t need to learn a browser scripting language, and you don’t need to rerecord the script if you restructure the HTML. You can make assertions at the HTML level, or you can make assertions at the ActionResult level, with fully strongly-typed access to any ViewData or Model values that were being supplied.

On the flip side, browser automation is still the only way to test your JavaScript.

To add these kinds of tests to your own ASP.NET MVC application, create a new class library project called MyApp.IntegrationTests or similar. Add a reference to MvcIntegrationTestFramework.dll, which you can get by downloading the demo project and compiling it, and also add a reference to your chosen unit testing framework (e.g., NUnit or xUnit).

Next, if you’re using NUnit, create a basic test fixture class as follows:

(If you’re using something other than NUnit, amend the syntax accordingly.)

Also – and seriously you can’t skip this step – you must add a post-build step so that each time you compile, Visual Studio will copy the assemblies from your integration test project’s \bin folder into your main ASP.NET MVC application’s \bin folder. I’ll explain why this is necessary later. 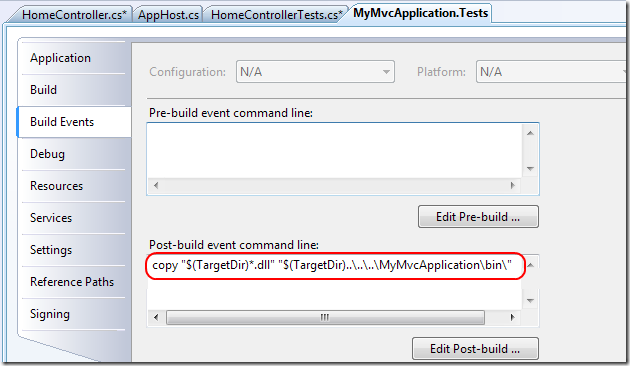 The test fixture you just created tells MvcIntegrationTestFramework to find your ASP.NET MVC application at the specified disk location, and to host it (without using IIS or any other web server). The resulting AppHost object then provides an API for issuing requests to your application, so you could write a test as follows:

The browsingSession object lets you read and write cookies and ASP.NET session values (note: ASP.NET initializes the Session collection only after the first request in any given browsing session). The RequestResult object that comes back from ProcessRequest() lets you access the rendered response text, the actual HttpResponse object, plus the MVC ActionExecutedContext and RequestExecutedContext objects that specify what the application did in ASP.NET MVC terms.

How Does it Work Internally?

Note: if you just want to use MvcIntegrationTestFramework, you don’t need to know any of the following. I provide this info just for your interest, and to give you a head start if you want to expand the framework or change it in any way.

MvcIntegrationTestFramework uses .NET’s built-in API for creating an ASP.NET-enabled .NET appdomain and using it to host an ASP.NET application from an arbitrary disk location. The test framework then does a bunch of funky reflection-assisted stuff to attach some interceptors and event handlers to the new HTTP runtime.

When you call ProcessRequest(), internally it calls ASP.NET’s HttpRuntime.ProcessRequest() method, which invokes the request-processing pipeline. The testing framework simulates an incoming HttpWorkerRequest according to the URL, HTTP method, querystring, form values, cookies, and headers that you specify.

While the request is running, MvcIntegrationTestFramework uses its knowledge of ASP.NET MVC to add interceptors to key points in the MVC request-processing pipeline. This is how it’s able to grab and expose the ActionResult and other MVC context objects so you can make assertions about them.

Of course, all this request processing has to happen within the ASP.NET-enabled appdomain, *not* the appdomain your test runner invokes the unit test on. So, we use the slightly bizarre appHost.SimulateBrowsingSession(browsingSession => { /* your code goes here */ } syntax to shuttle your test code across the appdomain boundary and run it there. Consequently, any variables you declare outside your anonymous delegate and then use inside it *must* be serializable, or you’ll get a serialization error when they get marshalled across the appdomain boundary. This is unlikely to be a problem in real world use.

Personally, I find this approach to integration testing more productive than browser automation in most cases, because the tests are fast to write and are less prone to break because of trivial HTML changes. I wouldn’t want to have thousands of integration tests, though – for one thing, they’d take ages to run – but end-to-end testing for key scenarios like logging in, registering, going through shopping carts, etc., proves pretty convincingly that the major functional areas of your app are working overall, leaving unit tests to prove the fine detail of each component.

Some of the code in MvcIntegrationTestFramework was adapted from Chot’s CodeProject article, some of the ideas came from a discussion at DDD South West with Richard Fennell who’s already doing something similar except with a dependency on TypeMock, and some bits of my HttpWorkerRequest simulation code were demonstrated years ago by Phil Haack in his HttpSimulator code, which is similar to MvcIntegrationTestFramework except it predates ASP.NET MVC.

Download the demo project. To run the integration tests, you’ll need to install *NUnit or some other test runner.* 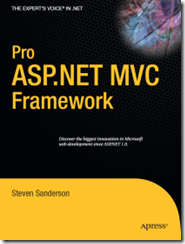 At last! Physical copies of my book have finally reached the public. I’ve been writing, tweaking, fixing, expanding, and polishing this since February 2008, following every preview release of ASP.NET MVC. Now it all reflects the final RTM version.