The mindset and terminology has shifted so much that some folks have started using a new name for the updated methodology: BDD. Here’s a brief overview*:

You can write BDD-style specifications about individual code units, in which case you’ll  probably use a context/specification style framework like RSpec (for Ruby) or in .NET something like MSpec or SpecUnit (personally, I don’t like either). Unit-level specifications work brilliantly for most code that ultimately exposes an API for other code. But personally, I spend most of my time writing UI code, usually with ASP.NET MVC, and UI code is fundamentally different. It isn’t about producing an API – it’s about producing user experience (UX) behaviours. These behaviours typically aren’t atomic (contained within a single click or HTTP request); their essence exists only across a sequence of interactions. As such, unit-level specifications can fall short and fail to capture the UI behaviours you have in mind. I wrote before about why, in real projects, I’ve found unit tests to be of limited value for ASP.NET MVC controllers.

Alternatively, you can write BDD-style specifications about UI interactions. Assuming you’re building a web application, you’ll probably use a browser automation library like WatiR/WatiN or Selenium, and script it either using one of the frameworks I just mentioned, or a given/when/then tool such as Cucumber (for Ruby) or SpecFlow (for .NET). In this blog post, I’ll describe these tools and provide an example based on ASP.NET MVC.

* I don’t claim to be an authority on BDD, so if you think I’ve got this all wrong, I invite you to come along and tell me what I’ve misunderstood. Try to be specific, please. My existing understanding is based on having done a lot of TDD, seeing its limitations especially in large teams, and recognising that some of these BDD ideas look like they could help with that.

Cucumber is a Ruby tool that offers a natural-language way to specify behaviours in terms of “Given, When, Then” (GWT) sentence fragments. This language is called Gherkin. You create a plain-text file (called a “.feature” file) containing a set of scenario definitions written in Gherkin, for example

… and also provide Ruby scripts that define what the runner should do when it hits matching steps, for example

The syntax is extremely flexible: Cucumber only cares about the Gherkin keywords “Given”, “When”, “Then”, “And” (plus a few others); everything else is simply matched against your regular expressions. Any tokens captured by capture groups in your regexes are passed to your step definition blocks as parameters. For web applications, it’s normal for your step definitions to work by using a browser automation library such as WatiN/WatiR or Selenium.

When you invoke Cucumber, it finds, parses and runs your .feature files, reporting the results (success in green, pending in yellow, failure in red):

Because the GWT model inherently describes sequences of interactions, and because natural-language .feature files are inherently decoupled from the implementation code (they don’t mention the name of any classes or methods), this whole approach is a perfect fit for UI automation rather than unit-level testing.

Because you can describe scenarios in the language of your domain and user interface, your resulting feature files should make perfect sense to business experts. So, unlike traditional unit test driven development, this methodology can finally deliver on the promise of executable specifications that are actually useful as documentation.

Doing it in .NET with SpecFlow

As I mentioned, Cucumber itself is a Ruby tool. At the end of this blog post I’ll discuss some options for running the original Cucumber tool in a .NET environment, but for now let’s forget about that – you can sidestep all that complexity with SpecFlow.

SpecFlow is an open-source .NET tool that lets you write specifications using 100%-Cucumber-compatible Gherkin syntax, and has a number of advantages over Cucumber itself:

To give you something concrete to get started with, I’ve made a very simple ASP.NET MVC 2 example application, built following the BDD workflow and with a full set of specs. To try it out,

You should easily be able to understand in high-level terms what the application does by reading the Gherkin specifications. Just imagine these specifications are the written result of a design meeting where you’ve got your client or boss to tell you how the user interactions should work.

Whenever you hit save while editing one of these files, SpecFlow generates a C# NUnit test fixture containing a [Test] method for each scenario. You don’t have to know or care about that, though. All you have to do is create step definitions in C# to match the lines in the Gherkin files.

At first, you won’t have any matching step definitions, so the NUnit test runner will show the tests as “inconclusive”: 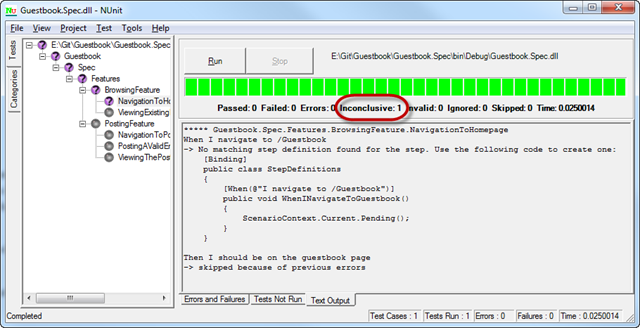 Notice that in the “Text Output” tab it provides C# stub code to create a matching step definition. Here’s some examples of the finished step definitions, written using WatiN to automate a browser:

There’s lots more I could say about WatiN syntax and Gherkin best practices, but this is a pretty long post already so I’ll leave that to others.

In case anyone’s wondering, I’m not trying to claim with this post that Cucumber-style UI automation tests are the one true way to do BDD, or that unit testing is dead. UI automation tends to be much more difficult to do than unit-level tests, because there are many more moving parts and you have to concern yourself with test data, setup and teardown, etc. Seriously, it is hard work, and requires a lot more persistence and dedication than mere unit testing, though it can also give many extra benefits especially with regard to detecting regressions.

What about Running Cucumber Itself on .NET?

If, for some reason, you don’t want to use SpecFlow and would rather run the original Ruby-based Cucumber tool, there are two main options for .NET programmers:

If you want to write step definitions in a .NET language, I don’t know why you wouldn’t just use SpecFlow. Since it’s 100% Gherkin-compatible, your feature files could in future be moved to a different implementation if desired. If you’ve tried others, I’d be interested to hear about your experiences. And no, I haven’t tried Spectre yet.

In the next post, I’ll show you one possible way to simplify or speed up UI-level specifications a little. It’s a cross-process code injection library that, among other things, you can use to inject a mock database into a running ASP.NET application without it knowing about it. Or, you can override configuration, or maybe simulate the passing of time.

Sometimes, it isn’t desirable to meddle with your app’s internals, but sometimes it is. Ruby coders can already do it using Webrat or cross-stub, and I’ve found reasons to want that power over .NET apps too.