I guess that shouldn’t surprise anyone, because well-respected techniques in all fields – e.g., techniques for winning debates, for dieting, for making money – tend to be strong in some scenarios but weaker in others. At one point I thought this observation was somehow controversial, but every other developer with whom I’ve discussed it already considered it self-evident that unit testing is sometimes very effective and sometimes just isn’t.

So why am I writing this? Two reasons:

How much does that code benefit from unit testing?

I could list a dozen great benefits that come from unit testing, but the list really boils down to two things: Unit tests help you to design some code while you’re writing it, and also help to *verify *that your implementation actually does what you intended it to do.

That sounds great – and often is – but it’s still legal to question the whole idea. Consider: Why do you actually want a secondary system to help design or verify your code? Doesn’t your source code itself express the design and behaviour of your solution? If unit tests are a repetition of the same design, in what sense do they demonstrate the correctness of that design? What about DRY?

In my experience, if your code is not obvious at a single glance – so working out its exact behaviour would take time and careful thought – then additional design and verification assistance (e.g., through unit testing) is essential to be sure that all your cases are handled properly. For example, if you’re coding a system of business rules or parsing a complex hierarchical string format, there will be too many possible code paths to check at a glance. In scenarios like these, unit tests are extremely helpful and valuable.

Conversely, if your code is basically obvious – so at a glance you can see exactly what it does – then additional design and verification (e.g., through unit testing) yields extremely minimal benefit, if any. For example, if you’re writing a method that gets the current date and the amount of free disk space, and then passes them both to a logging service, the source code listing says everything you need to say about that design. What would a unit test add here, given that you’d be mocking out the clock and disk space provider anyway?

In summary, I’m arguing that the benefit of unit testing is correlated with the non-obviousness of the code under test.

How much does it cost to unit test that code?

As many have written, you can reduce the cost of maintaining unit tests by following certain best practises. After doing that, the remaining cost may be tiny or it may still be significant.

In my experience, the remaining total cost of unit testing a certain code unit is very closely correlated with its number of dependencies on other code units. Why might that be?

Writing tests in the first place: If a method has no dependencies and merely acts as a simple function of a single parameter, unit tests are just a list of examples of input points mapping to output points. But if it takes four parameters and reads or writes five other services (abstract or otherwise) through class properties, you’ve got a lot of mocking to do and API usages to figure out. But this is a trivial cost compared to…

Maintenance: It’s well established that the more direct dependencies a code unit has, the more frequently it gets forced to change. (In fact, this is basically how “instability” is defined by standard code metrics tools.) You can easily see why: On any given day, each of those dependencies has some probability of changing its API or behaviour, forcing you to update your code and its unit tests.

Note that these issues apply equally even if you’re using an IoC container and coding purely to interfaces.

In summary, I’m arguing that the cost of unit testing is correlated with the number of dependencies (concrete or interface) that a code unit has.

Visualising the Costs and Benefits

OK, let’s put those two ideas on a single diagram: 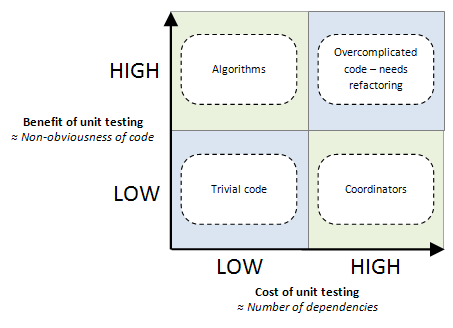 Let’s get practical. What about my ASP.NET MVC web application?

In ASP.NET MVC, the most general-purpose place to put your application logic is in your controllers. Unfortunately if you keep dumping stuff there, they’ll become unwieldy – amassing complex logic but being very expensive to unit test because of all the dependencies and overlapping concerns. This is known a
s the fat controller anti-pattern.

To avoid this, you can factor out independent bits of application logic into service classes and business logic into domain model classes. You can also split out cross-cutting concerns into ASP.NET MVC filters, custom model binders, and custom action results.

My controllers aim to be just a meeting place for all the different APIs of my many services. This controller code is trivially readable, and links together multiple dependencies. In cost-benefit terms, I find I’m more productive not unit testing these and instead using the time saved to keep refactoring and writing integration tests.

In case anyone is misinterpreting me, I’m not saying you shouldn’t do unit testing or TDD. What I am saying is:

This is just a description of my experience so far. It’s OK if yours is different.

To expand on the question, “Doesn’t your source code itself already express the design and behaviour of the solution?”, consider the point made by Jim Reeves in his now-much-cited 1992 article for C++ Journal entitled What is Software Design?

The final goal of any engineering activity is some type of [design] documentation …  After reviewing the software development life cycle as I understood it, I concluded that the only software documentation that actually seems to satisfy the criteria of an engineering design is the source code listings.

His argument is that our source code is not the software itself (for the actual software is an executable binary file of some sort); our source code is the design for that software. A programming language succeeds or fails to the extent that it lets us succinctly and accurately describe our intended software design to the compiler. So, reader, can and should unit tests replace source code as the truest expression of our designs?

Upcoming events in Cambridge and Gloucester

UK readers may be interested to hear of the following events, where you’ll get to see me frantically try to write lots of code in front of an audience, while constantly worrying that my laptop is about to do a BSoD: