This is intended to boost your server’s capacity. Because you don’t have so many worker threads blocked while waiting for I/O, you can handle many more concurrent requests. A while back I blogged about a way of doing this with an early preview release of ASP.NET MVC 1.0, but now in ASP.NET MVC 2.0 it’s a natively supported feature.

In this blog post I’m not going to explain how to create or work with asynchronous controllers. That’s already described elsewhere on the web, and you can see the process in action in TekPub’s “Controllers: Part 2” episode, and you’ll find extremely detailed coverage and tutorials into my forthcoming ASP.NET MVC 2.0 book when it’s published. Instead, I’m going to describe one possible way to measure the performance effects of using them, and explain how I learned that under many default circumstances, you won’t get any benefit from using them unless you make some crucial configuration changes.

To understand how asynchronous controllers respond to differing levels of traffic, and how this compares to a straightforward synchronous controller, I put together a little ASP.NET MVC 2.0 web application with two controllers. To simulate a long-running external I/O process, they both perform a SQL query that takes 2 seconds to complete (using the SQL command WAITFOR DELAY ’00:00:02′) and then they return the same fixed text to the browser. One of them does it synchronously; the other asynchronously.

Next, I put together a simple C# console application that simulates heavy traffic hitting a given URL. It simply requests the same URL over and over, calculating the rolling average of the last few response times. First it does so on just one thread, but then gradually increases the number of concurrent threads to 150 over a 30-minute period. If you want to try running this tool against your own site, you can download the C# source code. 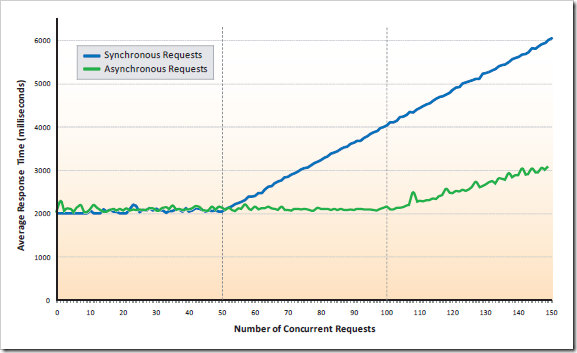 To understand this, first I need to tell you that I had set my ASP.NET MVC application’s worker thread pool to an artificially low maximum limit of 50 worker threads. My server actually has a default max threadpool size of 200 – a more sensible limit – but the results are made clearer if I reduce it.

As you can see, the synchronous and asynchronous requests performed exactly the same as long as there were enough worker threads to go around. And why shouldn’t they?

But once the threadpool was exhausted (> 50 clients), the synchronous requests had to form a queue to be serviced. Basic queuing theory tells us that the average time spent waiting in a queue is given by the formula:

… and this is exactly what we see in the graph. The queuing time grows linearly with the length of the queue. (Apologies for my indulgence in using a formula – sometimes I just can’t suppress my inner mathematician. I’ll get therapy if it becomes a problem.)

The asynchronous requests didn’t need to start queuing so soon, though. They don’t need to block a worker thread while waiting, so the threadpool limit wasn’t an issue. So why did they start queuing when there were more than 100 clients? It’s because the ADO.NET connection pool is limited to 100 concurrent connections by default.

In summary, what can we learn from all this?

Gotchas with Configuring for Asynchronous Controllers

The main surprise I encountered while trying to use asynchronous controllers was that, at first, I couldn’t observe any benefit at all. In fact, it took me almost a whole day of experimentation before I discovered all the things that were preventing them from making a difference. If I hadn’t been taking measurements, I’d never have known that my asynchronous controller was entirely pointless under default configurations. For me it’s a reminder that understanding the theory isn’t enough; you have to be able to measure it.

Here are some things you might not have realised:

If you don’t have high capacity requirements – e.g., if you’re building a small intranet application – then you can probably forget all about this blog post and asynchronous controllers in general. Most ASP.NET developers have never heard of asynchronous requests and they get along just fine.

But if you are trying to boost your server’s capacity and think asynchronous controllers are the answer, please be sure to run a practical test and make sure you can observe that your configuration meets your needs.

I’ve been writing unit tests regularly for 2-3 years now, and doing full-blown test-driven development (TDD) full time for about the last year. Throughout this whole time, I keep noticing the same thing over and over: