How often do your ASP.NET MVC views need to iterate over a collection to render some HTML for each item? For example, if your model is a collection of Person objects, and you want to render a table of them, you might write view code as follows: 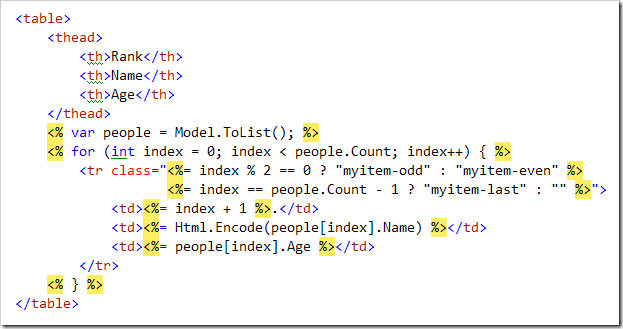 A few bits of this code make me uncomfortable:

So, how about the following alternative syntax? 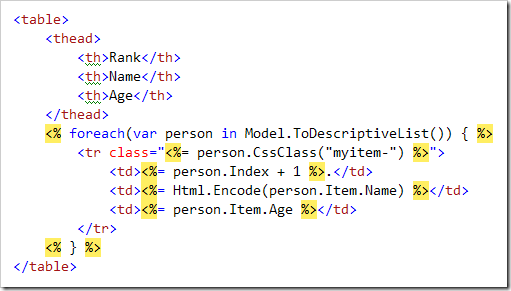 Admittedly it’s not radically different, but I think the simplification is worth it. No more kludgy temporary variable, no more manually working out the position of the final item, and no more ugly series of inline ternary operators.

To make the .ToDescriptiveList() helper available in your own application, first download the helper classes and add them to your solution. If you’re putting them into a namespace not normally referenced by your views, you’ll need to import their namespace by adding the following to your web.config file:

Now, if you add .ToDescriptiveList() on to the end of any IEnumerable in a view, you’ll get an enumerable of objects with the following methods/properties:

That’s all there is to it.

A note about NVelocity and its Fancy Loops syntax

I made this helper because I got jealous of NVelocity’s fancy loops syntax which at first glance appears to make iteration in views so neat and simple. So, I spiked a simple way to use similar syntax in ASPX views, but having done it, realised that there are many scenarios where this syntax is inadequate or forces you to repeat yourself (e.g., in tables, when the row markup varies by odd/even, but a certain column varies by first/last or index). That’s why, in the end, I settled on the more basic but more flexible option of just annotating a collection with first/last/odd/even/index information.

A note about jQuery and/or CSS 3

With jQuery or with CSS 3, you can use pseudoclasses such as :first, :last, :even, and

dd to style items by their position in a collection of DOM nodes. If you have the luxury of being able to rely on these, great, otherwise you might need a server-side solution such as the one I’ve presented here.

This blog post is aimed at developers with at least a small amount of unit testing experience. If you’ve never written a unit test, please read an introduction and have a go at it first.