Electron was first open-sourced in 2014, and gained immediate popularity as a way to build desktop apps using web technologies (HTML+CSS+JS). At the core of its design is the idea of bundling a predictable environment:

These choices offered a lot of value five years ago, but in late 2019 you might choose differently. And these choices are also key to why Electron has a reputation for being unusually resource-hungry. A default blank Electron 8.0.0 application is 164MB to download (66MB compressed), and runs as 4 separate processes consuming 150MB RAM in total.

It’s completely possible that these numbers look fine to you and are satisfactory for your scenario. If that’s the case, good for you! This post is not an attempt to bash Electron, which is a well-run project that people are clearly using successfully. In this post, I simply want to consider what other options we might have.

How light could it get?

Various Electron-lite alternative projects have already sprung up [1]. Of course, there are also PWAs, but that’s not what this post is about, since PWAs don’t have native access to the underlying OS.

We’ve had a lot of interest in using Blazor to build cross-platform desktop apps. It’s not surprising: combining the performance and productivity of C#/.NET with the familiarity of HTML/CSS UI rendering is powerful and appealing.

So, we published a sample and an experimental package for hosting Blazor on Electron. The key innovation here is that it’s not running on WebAssembly, but rather uses the normal cross-platform .NET Core runtime to achieve full native .NET performance and enable full access to the host OS without any browser sandbox limitations.

You can try this out today. Just note that it’s only an “asplabs” project, as we haven’t yet made any commitment to ship and support this technology.

It’s not hard to imagine how a Blazor hybrid desktop app could be slimmed down dramatically further. We could swap out Electron for a pure OS-native web view, reasoning that in 2019, there’s virtually always a good enough one available on your target machine. Plus we don’t really need Node as a cross-platform programming environment, since .NET Core already plays that role for us.

To verify this, I built an experiment called BlazorDesktop. This is very similar to BlazorElectron, and in fact most of the code is a copy-paste from it. Again, it runs on native .NET Core (so not on WebAssembly), but now it’s running on a much smaller rendering stack, without any bundled Chromium or Node.js. 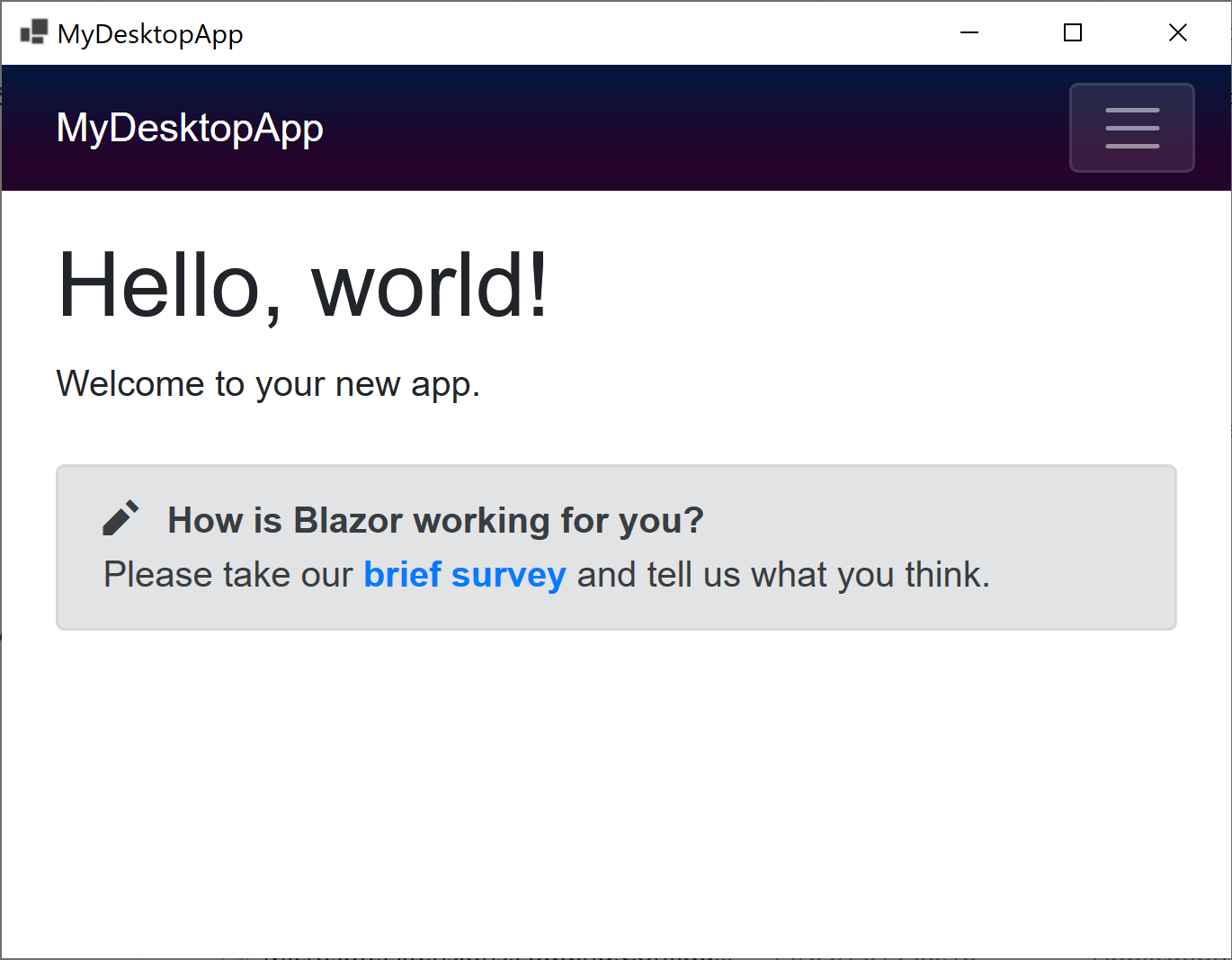 It’s a fully-functional Blazor application into which you can add any native .NET Core-based functionality, and runs as an extremely lightweight desktop app - see below for numbers. Unlike a PWA, it’s not limited to the browser sandbox.

If you’re interested in trying this out, please note that it’s purely a quick proof-of-concept, and currently is Windows only. Expanding it to be cross-platform wouldn’t be too hard (I’d use something like webview to add Mac+Linux support) but is not something I’m actively doing right now. Send a PR if you’re interested.

Not surprisingly, this minimal Blazor + webview application is significantly smaller and less memory-hungry than one built on the whole Chromium + Node stack: 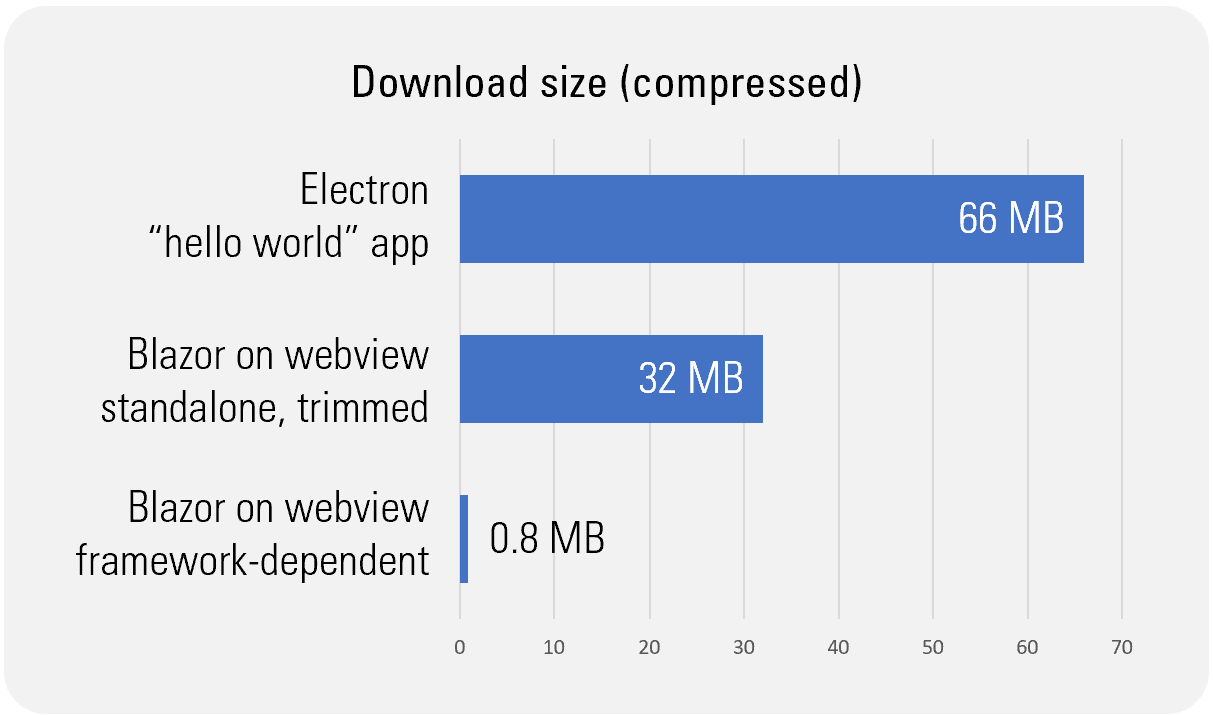 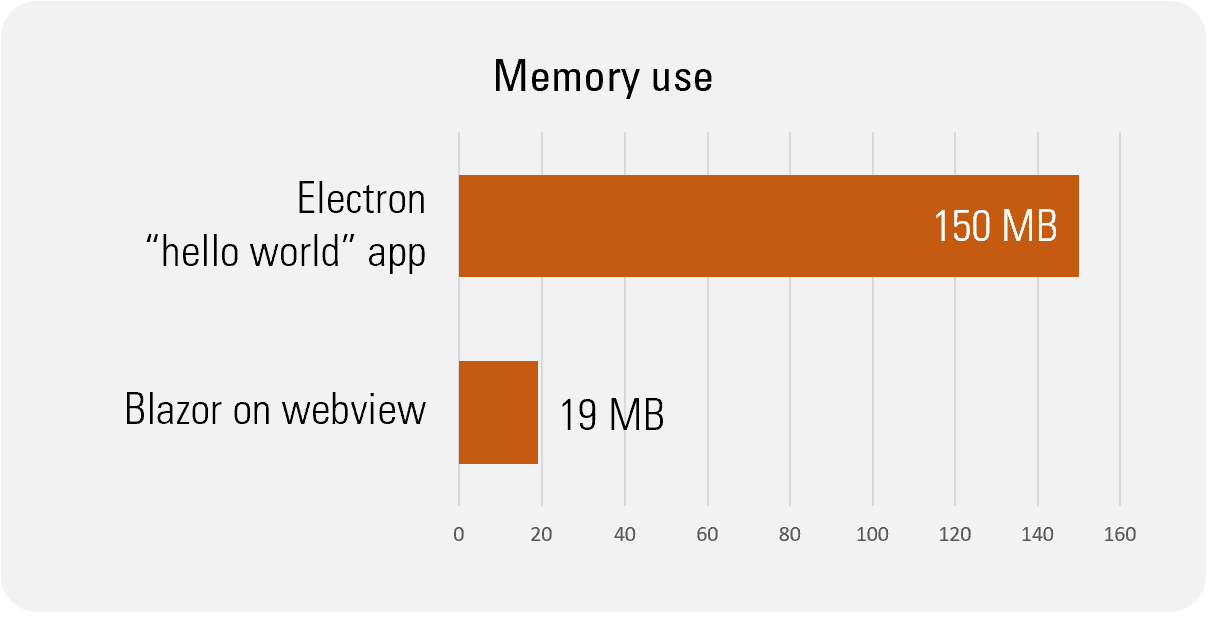 One of the neat things about .NET Core apps is that, with a simple switch, you can control whether the publish output bundles its own copy of the .NET Core runtime (a.k.a. standalone), or whether it assumes the runtime will already be installed on the target OS (a.k.a. framework-dependent). This is captured in the first graph above, and you can see it makes a huge difference to the output size, since the Blazor libraries themselves are very compact.

In corporate environments where you know that certain software is already installed, you can safely distribute tiny < 1MB framework-dependent apps, where the same binaries run on any supported OS. But for public distribution, you’d most likely publish a standalone app - generating different binaries for each of Windows, Mac, and Linux users.

Note that about 200KB of the compressed Blazor webview app above consists of Bootstrap styling, so you could drop that if you’re using something else.

What would have to be built to make this viable

As I’ve said, Blazor Desktop is currently just a quick proof-of-concept, built entirely during the waking part of my return journey from NDC Sydney. It would have a long way to go to turn into a viable product.

My reason for writing this is mainly to learn more about how the developer community feels about these technologies. Do you have scenarios for building hybrid desktop apps with .NET+HTML+CSS? Would you be happy to use Blazor with Electron, or do you feel it’s necessary to have something more bare-metal?

Many people have thought about building lighter alternatives to Electron over the years. Various open-source projects now exist, though it’s not clear that any really have the critical momentum for mass adoption. Some of them, like Chromely, eliminate Node and only bundle Chromium. Others, like Neutralino, eliminate Chromium and only bundle a Node-based programming model combined with the host OS’s browser technology. At the ultra-minimal end, webview is simply an abstraction over the idea of a webview: it shows your HTML/CSS in whatever browser technology is built into the host OS, and doesn’t provide any cross-platform programming model of its own.

A component to simplify working with user-supplied files